The exploration of social aesthetics dates back to the 80s when a group of young artists named “10th floor” neglected the well-established classical values in the academy and turned to neo-expressionism, urban art and other independent practices. Although their forms were usually borrowed from western art history, they declared a considerable interest in sociality, empathy and class formation, typically combining everyday life with mythological models, poetry, cinema, signs from mass production and so on, thus closing the gap between art and daily life. In turn, their social aspirations were already inspired by Tbilisi’s avant-garde, dating back to the 1910s when the Zdanevich brothers found Pirosmani, and Iliazd created the concept of “Everythingism” (“Всёчество”). He declared that time didn’t exist, and that artists were free to choose form according to their ideas and taste. This constituted a concept preceding that of contemporary pluralism, as the leader of the group “10th floor,” Karlo Kacharava, later admitted [Karlo Kacharava, Iliazd and modern times, 1994].

With 1980s art, a sort of cultural diversity was engendered, which has been growing since the 2010s, but is still largely ignored by political and economic elites. Nevertheless, it plays a huge role in the development of local communities and the so-called progressive youth. Failing to be integrated within institutions, not until now has this diversity  managed to find its way through the media, contemporary art galleries, clubs and informal centers. Back in the 80s and 90s, those movements were still scattered around the streets, at spontaneous gatherings, feasts and underground parties, making it impossible to trace them; but once the Tbilisi contemporary art scene was established, its context and issues became more visible and clear. Nowadays there are hundreds of artists from the younger generation, as well as some from the old, who systematically organize shows. Most of them describe the current socio-cultural conditions in the city, exposing ongoing political, urban and historical tides while seeking their own role within critical thinking and contemporary culture. The latter still lacks development and support, but it is where diversity takes place as a quasi-social avant-garde, striving to bring forward new ideas and reflections. Now the word avant-garde is also used very specifically among local communities. Lacking any institutional basis, it underlines not only an artistic practice, but one's lifestyle, social conditions, connections, and in some cases a group that shares the same interests through everyday life, work and entertainment. The latter has become the most important code of the scene, representing a continuation of Tbilisi’s bohemian spirit. 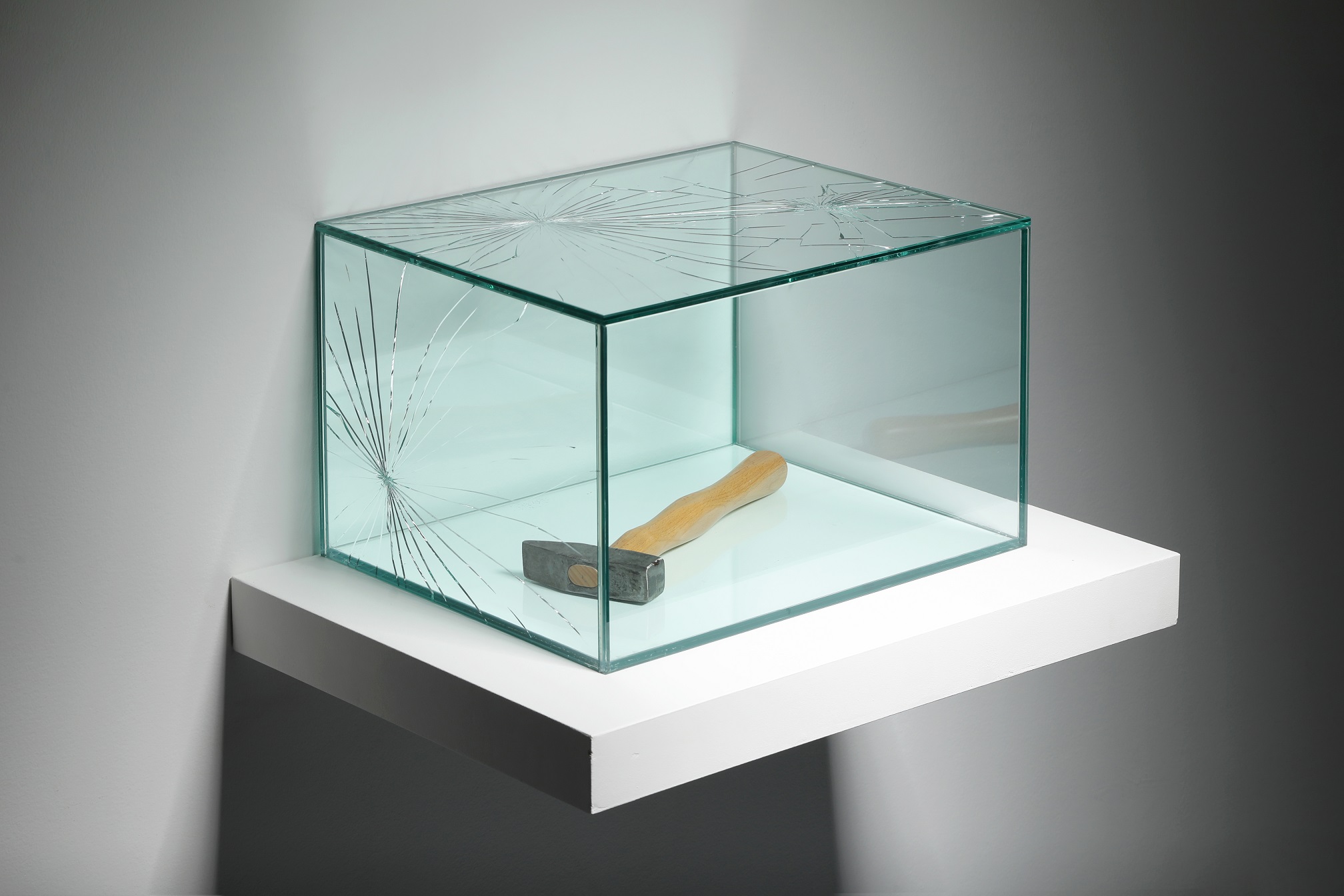 An interesting tendency can be found among certain artists from these communities, who form attractive urban phenomena. In some of the shows we find active use of objects taken directly from daily life. In Tezi Gabunia’s show “Privacy” we observe everyday objects altered and organized like museum artifacts. We then encounter a strange antagonism of things split between their altered forms and functionality, turning them into impenetrable objects. Under such tension the order of things collapses, leaving their previous lives behind and turning into an absurdist carnival. While the show rejects functionality completely (turning objects into self-referential artifacts), it also resists the everyday banality of things that surround us (by aspiring to a carnivalesque nature).

Nika Kutateladze “Tariel is getting ready for hibernation” (Gallery Art-beat, 2020)

Nika Kutateladze “Tariel is getting ready for hibernation” (Gallery Art-beat, 2020)

Another show that inaugurated social aesthetics was Nika Kutateladze’s immersive installation “Tariel is getting ready for hibernation” Exhibited during the pandemic, the only show that was presented during the second lockdown drew materials from a Georgian village – namely the parts taken from an abandoned house. The viewer was able to ascend the stairs and even touch the gallery ceiling, while standing on a construction made of wood and steel. There they could find family portraits, and uncover the mysterious stories of the village. While the exhibition had a direct social link, it also borrowed materials and narratives: reimagining them, turning them into an individual piece, letting us experience the process from within, and expanding social issues directly through the medium. It felt like the ignorance towards these people had finally been confronted through a claustrophobic and fascinating experience, both capturing viewers and at the same time allowing them to wander freely inside an altered environment.

In another solo show by Salome Dumbadze “Indoor Window”, a wide spectrum of social materials is present - from marble and ceramic to wood and rubber. Delicately executed animal portraits are placed in frames made of these materials, thus turning social usage into something else, something that becomes untraceable but also familiar to us. The portraits, with their tender color palette, fading light and fantastic figures, awaken the realm of soft sensuality, absorbing the canvas and becoming one with them, creating a magnificent and captivating double of the social, of the functional, which then gently invites us into its fairytale.

What is prominent among these artists is their curiosity and interest in the material world, which may have been triggered by the current economic situation. More specifically, the cultural devaluation that has been precipitated by rapid development of the upper classes and the economic circumstances of the yet invisible middle class: excluding any sort of individualism while flourishing kitsch and trash. The demand for progress is opposed to this condition, which is seen through an exploration of the sensuality of social objects and materials, turning them into artifacts radiating both profanity and sacredness. Nevertheless, we shouldn't understand this tendency as an attempt to aestheticize social life, nor should we perceive it as a political designation; those remarks are simply the basis of works that deny existence outside of social life, and utilize already known and familiar signs to reorganize meaning and visual narratives. If they are anything, they are social extensions. Yet they exist not as representations of sociality, moreover they strive to become part of an exchange*, blurring the lines between art and urbanization, becoming satellite images and existing among the other communal myths, such as: food, fashion, tradition, mass culture, advertisements, etc. This is the antithesis of local art, which does not necessarily encompass the entire art scene, but includes some of the major and upcoming artists in development of the local flux.

One more show that opened this year in “Obscura” was “The Wedding” (2021), by Natalia Kalandadze. It travels among the commodities of lower classes and their digital realm, celebrating the profane world through the most sacred and desired event in Georgian culture. Signified by the wedding dress, the bride, which still remains the highest stake of cultural exchange, is decentralized and detached from power. The entire room is covered with trashy posters, footage of the wedding feast, neon lights, and ordinary household objects, in this way dismantling collective power and uncovering the individual gesture. The bride, who was the guarantee of the family’s sacredness (unable as they are to access the profane), stands between the profane and sacred worlds, grasping the joy of individuation.

When discussing social aesthetics, we should also acknowledge the role of the media. Neglected by local institutions, contemporary art in Tbilisi found its way through various channels and programs. Initially “Artarea” was capable of providing a widespread informational network, which served as an additional layer for cultural exchange. Nowadays, a new platform, called ATINATI, is probably the first to bring local culture to a wider audience.

It creates a semi-formal institutional virtual space, which then assists and mediates artists among local and global viewers. Initially its focus was centred on the local culture and its popularization; but now it is gradually connecting with other major cities throughout Europe, creating a network within which the social role of art may be rediscovered. If the above-mentioned artworks can be taken as social extensions, this new platform is then a satellite that brings back images through life, and circulates them within the informational field. We live in a digital era, and artistic practice is unimaginable without media. The question is what will be born from this tendency once it overcomes all physical limitations and begins floating as a wide-spread phenomenon? The answer to this question is yet to be discovered.

* A movement which can be seen as a legacy of 20th century avant-garde, but with a postmodernist twist and democratic values.