Irakli Parjiani first took me to Jarji Balanchivadze’s place in the mid-1980s. Jarji was a composer, a man with a strange aura and energy. Everyone who wanted to be someone was in his orbit. They would put on performances of non-standard plays in their homes – where else could they do it? They would be given space in any theatre to do it – not because they were nobodies, but because their performances were so informal.

I remember one such play that was staged in the apartment of a young female painter on Nutsubidze Street. If I recall correctly, Irakli Parjiani designed the masks and Gia Bughadze designed the set. There were plenty of people involved in that production, none of them with any connection to the theater. That was the first home-staged play that I remember. Basically, if you didn’t create official forms of art, then you were a nobody in the art world and if you needed a performance space, you just used your own home. Organizing an exhibition at home is relatively easy – but a play? Just imagine, we’re talking about 1983-84.

This is Irakli’s place – a workshop and a home combined. Lots of interesting meetings took place here. These homes fulfilled a strange function – they preserved, or transformed people’s energies. In any case, things happened in homes that couldn’t happen outside.

Apart from being a very accomplished painter, Irakli was a person with whom any interaction was highly important – not just for me but for other people too. I have no idea how he found the time to paint. Whenever I went to visit him, there were always people in his house. That bloody Soviet Union was a really strange country – there were so many things we were absolutely forbidden to talk about.

But at Irakli’s place, we would always talk, of course – and we’d talk especially about those things that were forbidden. We don’t think about it now, but at the time, we could have gone to jail for doing that. For this reason, these discussions were always tinged with fear and suspicion. When you met a person for the first time, you needed to take time, not only to decide whether or not you would get on, but also to find out who that person really way. And yet, these friendships helped us to really grow. I realized quite late that personal interaction is the most important learning process. Irakli Parjiani’s house was just that kind of place – where you could constantly interact and talk about things.

This is a picture of us visiting artist Koka Ramishvili. The works of contemporary painters were not officially exhibited at that time, so in order to see their works, you had to visit the artist at home. You would go and look through their paintings and in the end it turned into a meeting, a discussion… Here the artists Mamuka Japaridze and Karlo Kacharava are with Koka. Karlo was a different thing altogether – whenever he turned up at someone’s house, a discussion would also ensure. You couldn’t just sit there idly with him, he always wanted to discuss and debate – why this or that work was good or bad etc.

Guga Kotetishvili’s house was another such place. Tato is making a film in this photo, but you can hardly understand what’s going on. The door to the house was always open. Vakhushti, Tato, Guga, Manana and Tato’s wife all lived there. I went there many times and always found the door to the apartment open when no one was inside. You could just go in, open the cupboard and eat something if you wanted. Sometimes people would gather there by chance – you’d go in, and they’d just be sitting there talking. You would join in by saying a few words, and before you knew it……

This is Gia Rigvava’s place. Gia is a painter that really represents our generation. He graduated from the Surikov Art Institute in Moscow. In this photo, we’re in his country house in Tskneti. You know how it was …. Whenever someone would read something new, they would tell us about the book – half of it would be true and half of it would be retold with mistakes, and since we didn’t have access to the information ourselves, that subjective version would become our reality and our truth. When Karlo Kacharava would read something, he would interpret it and retell it to us in his own way, and he was always the main source of information for us. We’d use him as a source and you would reach conclusions that bore no relation to reality. Nowadays you can just type someone’s name and get all the relevant information right away. Back then we would live by whatever sources of information we could get our hands on and there were no other truths for us. It was like there was this vacuum around us.

I once took pictures of Art in America magazine. I got my hands on it once and realized I would be able to find out what was going on “over there”. What would we do in this situation? You had to take pictures of the magazine so that you could print the photos later and look through it more thoroughly. We needed that information. I would pay 10 rubles for each edition.

This is Mamuka Tsetskhladze’s place. Here Lia is wearing special clothing which they had made themselves – they used this as costumes for the play. Such things were common back then.

This is Lika Nadaraia’s place, where she lived alone. Very interesting paintings by contemporary artists adorned the walls of her apartment. Their paintings would rarely sell at that time, so they would just give them as gifts to their friends.

This is Christmas at Lika’s place. Nobody celebrated Christmas back then (1988-1989). These costumes were handmade, and they would use them later for costume parties.

This is Mamuka Japaridze’s home and work space, where exhibitions would be arranged at the drop of a hat. There was some foreign curator at his place at the time, so he literally found himself in the middle of an exhibition.

Actually, the first home exhibition happened at Gia Loria’s place. It was arranged by the group of “10th floor” arists – and was named the Archivists’ Exhibition. I don’t have a photo of the event because I didn’t know that group at the time.

This is poet Dato Chikhladze at Shalva Pantsulaia’s place. Shalva lived alone. People would go there to drink and have a good time in the first instance, but it always ended up becoming a discussion about poetry. Actually, everything depended on how much money they had.

Parajanov’s house was another such place, actually. Iura (Yuri Mechitov) took me there once. We often met strangers there too. I think that, since he was a person who had fallen foul of the system, he decided to turn his private home into a work space as well – no one could stop him from doing that.

This is Gia Edzgveradze’s place. Gia was already living in Germany by this time, but he had come back for a short visit. He called us and asked us whether we wanted to set up a Free Academy. Actually we held several meetings and talked about this Academy – the idea was to create an alternative to the existing, outdated Academy, but of course nothing came of it at all. 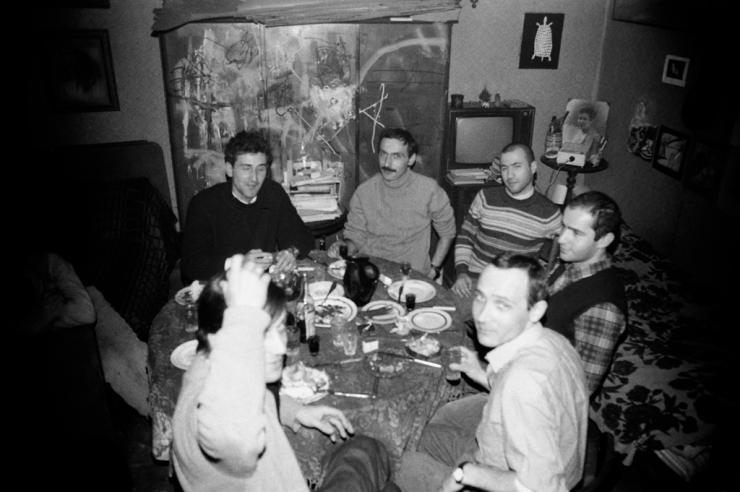 This is Oleg Timchenko’s house. Similar things happened there too.

This is Chubika’s (Nino Chubinishvili) place. There’s obviously some kind of party going on.

This is us at Dato Chikhladze’s place. He’s showing us his newest works.

We had no money, and no one would ever let us use a hall, so musician Lado Burduli came up with the idea of arranging fashion shows, concerts, meetings and other events at his place. Lado arranged a few concerts later, in the second half of the 1990s at the stadium, and at Rustaveli Theater too. However, before he started doing that, we would go to his place. Many musicians basically grew up at Lado’s house. He didn’t just hold his own concerts there – he also arranged concerts for other musicians. There would often be a party at his place and all of us would go there.

There were no chairs or anything – we would just sit on the floor and have a good time.

You probably think these candles are decorations or something, right? Actually everything happened by candlelight. This is my camera’s flashlight, since there was no electricity at the time.

The only “looked after” space that we managed to get access to for an exhibition was the lower floor of the Tbilisi History Museum building. Lika Mamatsasvili worked there. This was back in 1988. Lika said the space below was damp anyway, nobody would disturb us, so we could do what we wanted down there. We organized a few exhibitions, but you can’t really call those events “official”. Yes, they were held in a public space, but everything still came about thanks to the goodwill of one person.

Gradually, we started to move outside. There was a rock concert in the stadium that Lado organized, and he brought everyone there. After that, they held another concert in the old building of the Royal District Theater – they were just ruins at the time, so they were told they could do whatever they wanted. The concert was titled “De Music” and even artists took part in it. This sort of concert, held in a semi-legal environment, started to take place from around 1995.

Still, the main gathering places before that were houses. People obviously still entertain at home, but back then these homes had a different function. When there were no fashion shows, and the only place you could hold one was at Lado’s house, what do you call that? When people don’t read poetry anywhere and a poetry night is held at someone’s house – what do you call that? This is what “Writers’ House” really means. When there are no modern art exhibitions and so an informal event is organized at Gia Loria’s place, what do you call that? This is truly a “national gallery”. Public spaces were locked behind closed doors in people’s houses.

Something similar was happening in the Moscow underground at the time – this photo was taken in Moscow, in Furmankovka, where Georgian artists like Gela Patiashvili also lived.

Loggiamania and building upon building

The place of gathering of the valley- N2 Story from Ideateka

With your help we will be able to create even more high quality material Subscribe
<!-- End Meta Pixel Code —>